As the city of Cleveland begins to revive the Flats of Cleveland, the Greater Cleveland Aquarium is one of the first and highly anticipated developments to be built in the Nautica Entertainment Complex.

Considering the aquarium is expected to attract at least 400,000 visitors annually, Precision ProCut is honored to have been involved in its initial phase of construction for a future tourism and entertainment feature in Cleveland. Starting in the beginning of March, ProCut successfully completed its concrete sawing and selective demolition portion of the aquarium project within two months.

The New Zealand-based aquarium design company, Marinescape NZ Limited, and the local Jacobs Entertainment, Inc. joined to build the Greater Cleveland Aquarium in the historic Powerhouse. This Marinescape walk-through aquarium will be the first of its kind built in the United States, and 22nd aquarium that Marinescape has built in the world. It will also be the world's first aquarium exhibit located inside a 60-feet tall smokestack, presenting some unique challenges for the developers and construction laborers.

The aquarium required complete interior demolition of the lower level of the Powerhouse to facilitate new construction of the aquarium's 70,000 square feet of exhibits. Marinescape NZ Limited and Jacobs Entertainment hired Precision ProCut to perform the selective demolition, concrete cutting and removal services prior to placing the exhibits and remaining features.

ProCut worked in the basement of the Powerhouse, which will be serving its third purpose since it was built in the late 19th century, to originally provide energy to Cleveland's streetcars. The Powerhouse was renovated in the 1980s to house restaurants, stores and bars.

Since March 2011, ProCut has been contributing to the Powerhouse's third transformation by clearing the way for Cleveland's first underwater, walk-through aquarium. The Powerhouse basement will allow for 40 aquariums, including ceiling and Seatube tanks, to be built within seven walk-through rooms with specific themes representing bodies of water, such as the Great Lakes, Caribbean and Pacific Ocean.

Precision's demolition team removed ceiling plaster and created openings in the concrete floors to insert the tall aquariums. They used four different saws to complete the selective demolition of the interior structures, including beams, flooring and walls. ProCut used the Electric Mini Excavator to remove the concrete and additional materials from the tight, interior spaces. They also tested the concrete surface with its Ground Penetrating Radar to determine the thickness of the concrete and identify any structural and nonstructural targets embedded in the concrete before cutting.

ProCut is proud to have successfully completed its contracted work of the exciting new development in the Flats, and avoided disturbing the operations of the banquet facility, Windows on the River, located above the construction in the Powerhouse. The ProCut team looks forward to seeing the results of their work as soon as the aquarium construction finishes and opens in January 2012. 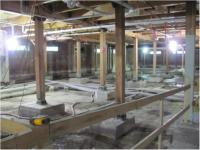 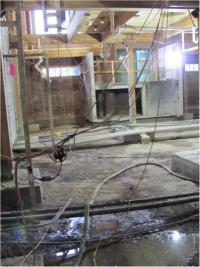 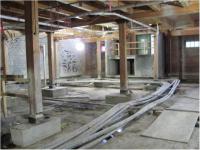