On Monday, March 26, 2012, General Electric (GE) Lighting celebrated its 100th anniversary at Nela Park that included the unearthing of a time capsule placed in Building 307 during its construction 100 years ago. In order to successfully and carefully remove the time capsule, Welty Building Company hired Precision ProCut's Project Manager, Matt Marcum, to verify its approximate location. This resulted into Marcum offering solutions to GE Lighting's Carl Hanson to create a penetration for accessing the time capsule without damaging the building's integrity.

During the weeks leading up to the ceremony at Nela Park, Marcum visited the site four times to prepare for extracting the time capsule with Hanson and Welty. He first scanned the cornerstone with the Ground Penetrating Radar to locate the time capsule, which was a lead box placed within the cornerstone located at the base of the historic building.

After verifying the location, Marcum predrilled the area to prepare for the extraction. Marcum line drilled 3 ½ inch diameter by 7 inch deep holes into the stone. This prepared the area according to GE Lighting's request to keep the time capsule encapsulated until the day of the reception.

As the GE CEO, executives, employees, media representatives and community gathered around Building 307 in the center of the Nela Park campus for the presentation, Marcum assisted GE Lighting's Bill Bogatoy in removing the lead box and the fragile light bulbs from the drilled hole. They peeled the sides of the lead box off to reveal the time capsule's artifacts, including photos of Nela's founders, journals, a book of technical specifications and a Cleveland Plain Dealer article.

The GE executives displayed all the monumental artifacts found in the time capsule and even tested one of the 40-watt original light bulbs to show it still worked. Precision is honored to have been part of the 100th anniversary and assist in revealing a significant artifact in GE Lighting's history. 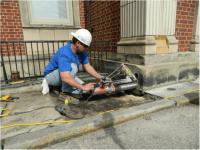 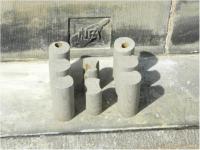 The cores removed and placed in front of where the time capsule and 5 light bulbs were located in Building 307. 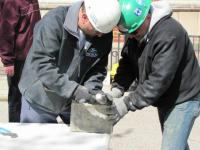 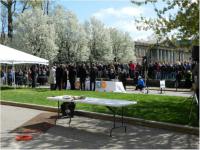