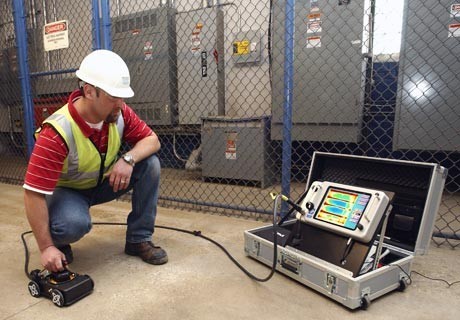 Radar is a system that uses electromagnetic (EM) waves to identify the range, altitude, direction, or speed of both moving and fixed objects such as aircraft, ships, motor vehicles, weather formations, and terrain. A transmitter emits radio waves, which are reflected by the target and detected by a receiver, typically in the same location as the transmitter. Although the radio signal returned is usually very weak, radio signals can easily be amplified. This enables radar to detect objects at ranges where other emissions, such as sound or visible light, would be too weak to detect.

What is Ground Penetrating Radar?

Ground penetrating radar (GPR) is a geophysical method that uses radar pulses to image the subsurface. This non-destructive method uses electromagnetic (EM) radiation in the microwave band (UHF/VHF frequencies) of the radio spectrum, and detects the reflected signals from subsurface structures.

The depth range of GPR is limited by the electrical conductivity of the concrete, and the transmitting frequency. Higher frequencies do not penetrate as far as lower frequencies, but give better resolution. Optimal depth penetration is achieved in massive dry materials such as granite, limestone, and concrete. In moist conditions with high electrical conductivity, penetration is limited.

The waves travel from the transmitting antenna into the concrete where they are reflected by inconsistencies in the concrete. The receiver records the electric field returning from the subsurface as a function of time. Such a recording is known as a trace. A set of traces collected along a line is known as a profile. A plot of a profile is known as a radargram and resembles a vertical slice through the concrete. There are several methods to transform the profile to a true depth section. The basic principle is, however, always the same. If we know the radar wave velocity and the time it takes for the radar wave to travel along the path transmitter – reflecting point – receiver, it is possible to calculate the depth to the reflecting point in the concrete.